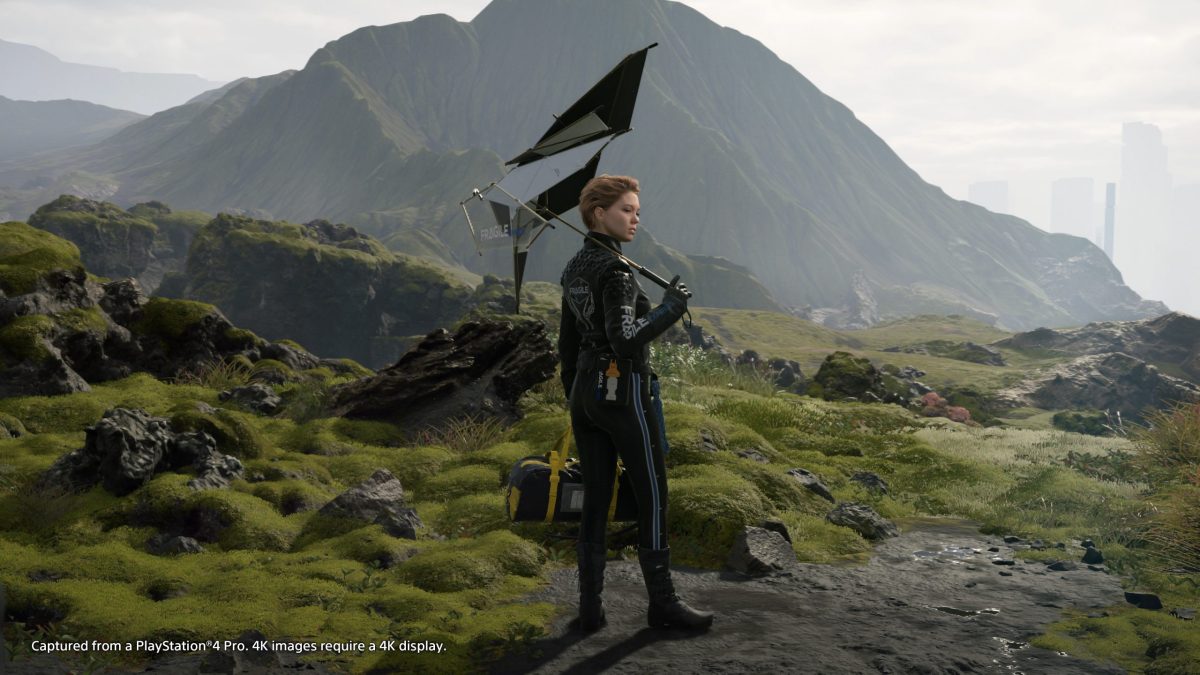 Wow, it’s been a while since I did one of these things, but here we go.

I’m a fan of Hideo Kojima. Have been ever since the first Metal Gear Solid on the PS1 back in 1998. Holy crap, has it really been 21 years!? So the release of a new Kojima game is always something of an event in my gaming life. Kojima is one of those game developers who easily slides into the “auteur” category. There’s never any chance of mistaking a Kojima game for anyone else’s. He has his motifs, the rambling philosophy, the extended cutscenes, the unexpected gamey playfulness at inappropriate moments. And he brought all that to his first, unfettered, Konami-Ain’t-Holding-Me-Back-Anymore game, Death Stranding. This game is divisive as hell, but I won’t keep anyone in suspense; I dug it.

Where to start with this game? It’s a post-apocalyptic America. Massive explosions called void outs devastated the USA, and huge craters dot the country. The result is destroyed infrastructure and survivors huddled away in a few cities, while others tough it out in shelters.

To make matters worse, “Beached Things,” or BTs, are killer ghosts prowling the ruined landscape. “Time fall” replaced rainfall, a new type of rain that accelerates time. Anyone out in the rain too long can literally die of old age. The surviving society relies heavily on “porters” to transport necessary materials across the incredibly hazardous territory. In other words, the logistics we now take for granted that get stuff on our door a day after we order it, are now the lifeline keeping some Americans alive.

Sam Porter Bridges is one of these Porters, a man with a ruined past, who has chosen to keep delivering or die trying. When an attempt to create a new Internet fails, Sam is recruited by a dying President of the UCA (United Cities of America) to complete the task left undone by the failed “first expedition.” Throughout the game, Sam huffs it across a devastated but hauntingly beautiful America–that looks suspiciously like Iceland–and uncovers a typically elaborate, buzzword ridden Kojima conspiracy. So, yes, you play the role of a delivery man, as portrayed by Norman Reedus. And your job is to “make America whole again” one package dropped off at doorsteps at a time.

Death Stranding is an open-world game, so in one sense, “pace” isn’t an issue. You can play it at your own pace, powering through the main story missions to the end, or you can meander everywhere, getting into places that are too high level for you right now or won’t be relevant to the story until later. Despite that, however, this is a hugely divisive game and for good reason. Kojima has eschewed the normal drip-feed of action in favor of a much more complex, abstract form of delayed gratification. There’s combat, and stealth, as one would expect from the creator of the Metal Gear series, but those are ancillary to the main point of the game, which is careful exploration and connecting people both literally and figuratively.

Kojima wants people to feel isolated, lonely, and challenged. Many portions of the game put Sam Porter Bridges alone, traipsing through beautiful, desolate and harsh environments to reach out and deliver goods to isolated people. If you’re the kind of gamer that ignored the main missions in Red Dead Redemption 2 and spent hours riding your horse, exploring forests and trapping animals, Death Stranding is your game. If you need your gameplay punctuated with a lot of shooting and moment-to-moment high octane action with clear signposts on where to go and what to do next, skip this game. Death Stranding is very much a game that points you in the general direction of a shack squirreled away in a harsh mountain range, and says, “You figure out the rest.”

This experimental game design is dedicated to a theme Kojima has been mulling over a long time. Our world feels more divided and antagonistic than ever before, and it bothered Kojima so much he created a game espousing that connections between people are essential. Isolationism is destructive, and reaching out to others, forming meaningful relationships, is critical to human health and happiness. Helping, not hurting each other, is what we should be doing.

In service of this, Kojima’s game mechanics focus a lot on inventory management in the service of others and preparing yourself for a journey. You start out walking everywhere on foot, scaling mountains, rappelling down cliffs, and managing frostbite. By the end of the game, you’re traversing hundreds of meters in seconds via zip-line, and driving down roads paved by you and other players. And it’s the online component where Kojima’s theme really shines. I find most online games stressful because of the predatory nature of competitive online play. I played Dark Souls with the LAN cable pulled out of my machine; if you played connected to the Internet, other players could invade your game, ambush you and kill you, which is was the intended purpose.

Death Stranding takes a wholly cooperative, indirect approach. You never meet another player, but you always see the handiwork of others. When you play online, the ladders they’ve left to climb mountains, the bridges they’ve built to cross rivers, and even the shelters they’ve made to provide respite appear in your game. When you leave your own structures or gear behind, others can make use of them as well. This is one of the first online games I’ve played where playing in isolation hurts your progress, but playing connected allows you to help others and, in turn, be helped by them.

Then there’s the story, which is… 100%, pure, unadulterated Kojima-ness. Kojima plays with puns, bashes people over the head with his thematic ambitions, and marries some crazy ideas with beautiful visuals and inappropriate moments of game-related humor. All of that is still present in Death Stranding, but without the constraints Konami would typically have placed on him. That is good, in that Kojima finally tells his story his way, without corporate obstacles standing in the way. It’s also bad if you believe that even geniuses should sometimes have someone on hand to say “No. Stop. You’ve gone too far, exercise some creative discipline.”

Death Stranding isn’t the most self-indulgent story I’ve ever experienced, but it certainly is indulgent. There are some moments of pure WTFness, where you wonder why an idea came up, and how it was allowed to be approved and created in the game. But there are also some moments of genuine heart, and I don’t doubt the sincerity of Kojima’s concerns. He gets a bit overwrought sometimes in preaching his message, but the message itself is still a good one.

Relationships matter. Family, whether blood or found, matters. It’s also mixed with the occasional swan dive into WWI and WWII. Or killer ghosts that search for people with handprints in the mud, and babies in bottles that can calibrate spectral sensor systems. For some, the surreality of all this is going to be incredibly off-putting. For others, it’s a bold experiment that doesn’t always work but is always willing to try.

I’m torn on recommending Death Stranding. I enjoyed it a lot, and I even got emotional during some moments of the game. At the same time, there is a very daring design ethic at work where sometimes, “monotony is a feature, not a bug.” Kojima wants players to experience a sense of progression, and that means that a sense of slog/grinding is deliberately built into the game mechanics. This video game is not comfort food. It’s not warm, inviting, and familiar with an easy flavor you can settle down with and forget about. This game challenges you and tries to provoke you, or even pull certain insights out of what you’d typically consider a dull or poorly designed experience.

And yet, at the same time, there’s beauty in this game. Like the Red Dead games, there are moments of unexpected gorgeousness, where you stumble across a valley, or look over a mountain, and music swells. There are stories about people who have given up on others, then changed their minds, because you didn’t give up on them. Moments of love and moments where sacrifices must be made because of love appear.  The game has long stretches where you wander desolate landscapes; then suddenly, you’re fighting ghosts and hiding in the tall grass from fanatics trying to steal your cargo.

If you want something different, that will try–and not necessarily succeed–to push you and make you think. Give Death Stranding a shot. If you want a game that’s like an old, familiar song or favorite piece of clothing, this isn’t it. Personally, though, I enjoyed my time with this game.